Status of ITS resources

This is the first in a series of articles celebrating 20 years of the Master of Agribusiness program. As part of the year-long celebration, the MAB program will publish articles highlighting alumni and research conducted by students throughout the program. #MABTurns20 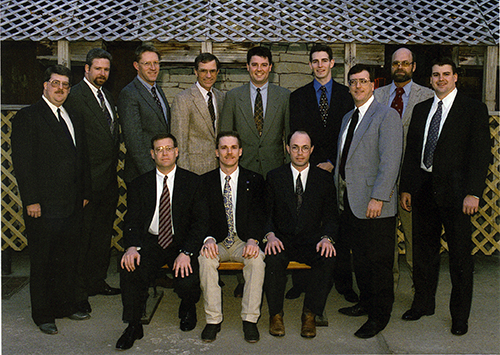 MAB Alum Bret Oelke, President of Innovus Agra LLC., said, "As a member of the ‘original’ MAB class, it sometimes felt as if the plane was being built as we were flying in it. This is not to say that I disapproved of the program, as a matter of fact it was exciting to be a part of something new and ahead of its time in education for working agriculture professionals."

At the time, distance education was relatively new, and the MAB program faced a learning curve in developing its curriculum and delivery methods.

"You’ll recall that distance learning and online education was in its very infancy in 1998, the year the first class made the decision to enroll and try the program. There was no path or template to follow, so the Ag Econ department had to basically invent the program from scratch. They did a really nice job of putting together an interesting and challenging program, with a lot of useful information and tools," Steve Stephens, Senior Vice President of American AgCredit, said.

The combination of distance education with face-to-face on-campus sessions, gave students the flexibility to earn a master’s degree without relocating for school, but also the opportunity to meet classmates and faculty in person to build relationships.

"I believe our first class benefited from one aspect of the program that I just don’t see how later classes do - and that was the ‘intimacy’ of the class. My recall is that there were 12 of us, so we all got to know each other during those weeks we were together," said Kurt David, COO, Eagle Communications. "I quickly learned during the MAB program that the faculty is comprised of so many brilliant people. The faculty at K-State know agriculture, and I knew I had surrounded myself with people who were smarter than I was. I was excited about that - that is when I knew I was going to learn from this experience."

In developing the curriculum, faculty in the Agricultural Economics department pulled the best pieces of a masters in agricultural economics and industry needs identified by an advisory board to create coursework that would be immediately applicable within industry.

"The program was a mix of hard and soft skills. Some skills/education I’ve used heavily are strategic planning, finance, agricultural policy, and even logistics to an extent. I know that the skills I acquired in the MAB program helped me make better decisions along the way, and definitely helped me advance and progress through the companies I’ve worked for. Probably most importantly, it’s given me the skills to analyze and understand my company, my industry and the world much more robustly," said Stephens.

The Master of Agribusiness program was originally developed for individuals working in the food and agricultural industry to learn business and economic skills without being on campus full time, but Dr. Allen Featherstone, Director of the MAB program and Head of the Agricultural Economics Department, soon realized the program’s reach could be much broader. From that first class with 12 students across the Great Plains, the program now has enrollment of 30-40 each year from 40 states within the United States and in more than 30 countries.

"We created a program that meets the educational needs of working professionals, and we deliver it in a format without interrupting work schedules and family life," said Featherstone. "Students can access the program regardless of where they are, and we now have students from around the world participating in the MAB."

From different backgrounds and experiences in the agriculture industry, that first class came together to shape the Master of Agribusiness program and help each other through the trials of graduate school.

Looking back, Rich Porter, Owner of Porter Cattle Company, said, "Thirty years after completing my bachelor’s degree, by then a grizzled old rancher myself, I started working on a Master of Agribusiness degree. I was fearful because my computer skills were primitive compared with those of the other students in the class. Their business experiences came from working with computers in industry, not from working with cattle and tractors. With the help and support of faculty and my classmates, I made it through the program. My computer skills were never elegant, but adequate to accomplish the task.

"Being in the first MAB class was exciting, because both the students and instructors were trying something new. Working an additional 12-15 hours a week for two and a half years, cut into our sleep time, but the increased knowledge benefited me vastly more than my investment in time and money," Porter said.